» Blog » Building a Relationship » How We Bought Our First Pony

We are often asked how we came to own our adorable little pony, which more strongly resembles an offspring of some mythical white creature with a single horn protruding from the center of its forehead. As if resembling a unicorn was not endearing enough, its name is arguably cuter – Bunny. 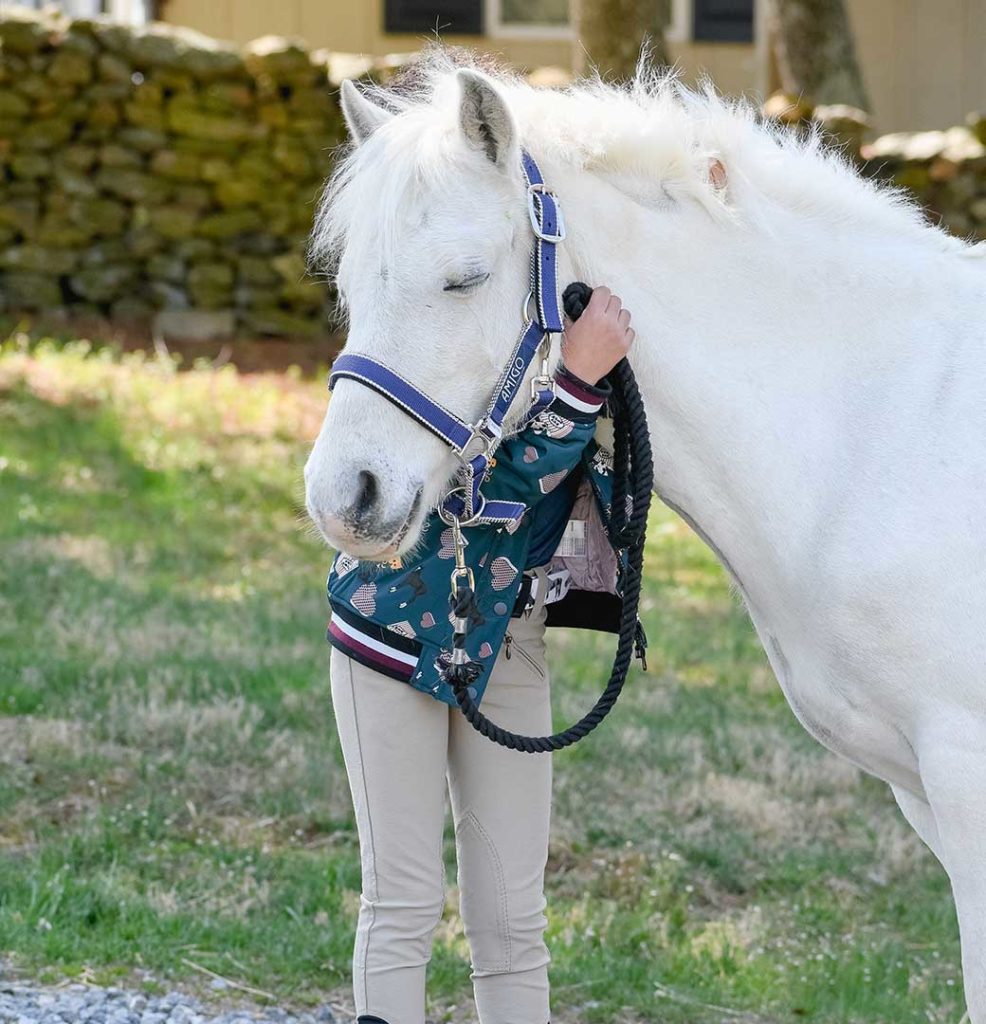 Johanna was a young rider (only six months into her journey) when we decided to get her a pony of her own. This decision was primarily based on two factors: (1) the riding school only had two ponies; (2) Johanna was ready and needed more riding time to elevate her skills.

Having only two ponies available and a constant influx of beginner riders, often left Johanna with having to ride some of the stable’s larger lesson horses. As her skills improved, she started to take her riding more seriously and wanted to ride more often. Having her own pony would give her that extra time in the saddle to develop more by practicing what she had learned in her weekly lessons.

One of the most important aspects of the pony shopping process is to be under the guidance of a trusted trainer. A trainer who knows the rider well and can assess what criteria to look for in a pony to complement not only the rider’s skill set but also the rider’s personality. Entrusting the tedious pony hunting process to our trainer, we were confident that little Johanna would soon be calling a suitable pony her own.

While we relied heavily on the expertise of our trainer, we focused on four criteria that were important to us:

We wanted a small pony to help build confidence. 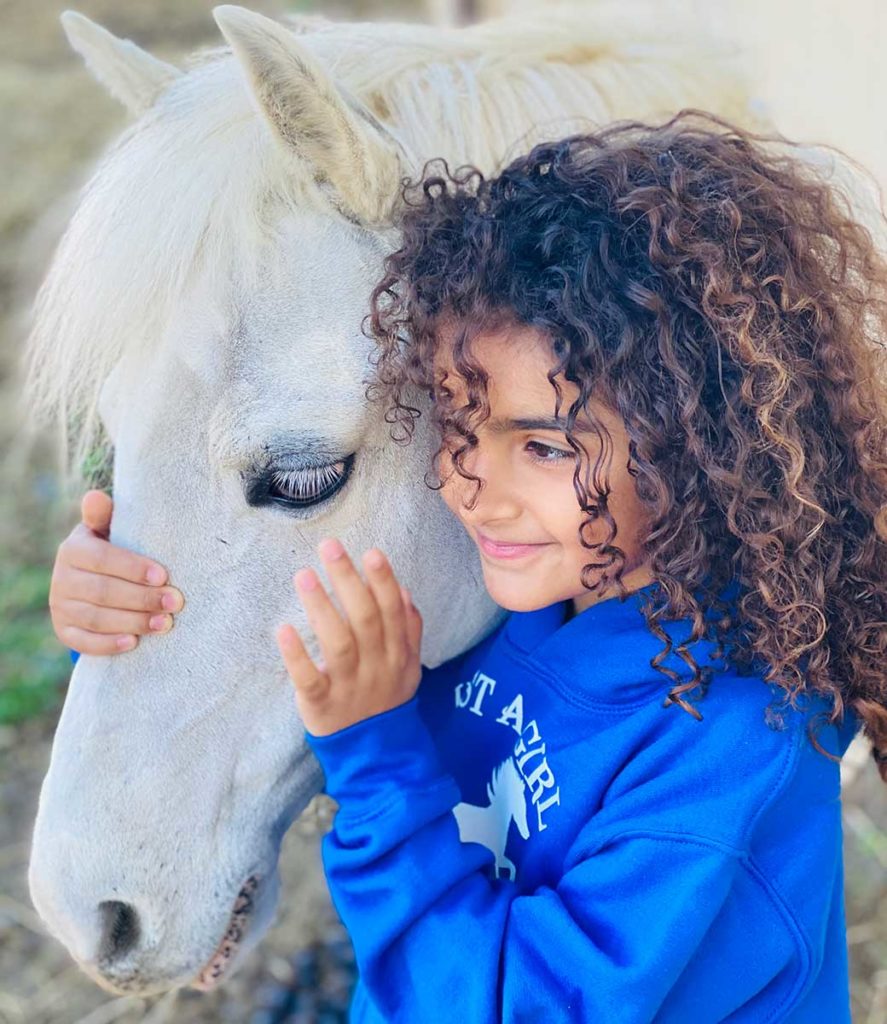 We loved the idea of Johanna learning and developing more on something smaller… a smaller pony in size that would make her feel confident and comfortable. Bunny was the perfect size for five-year-old Johanna. She was able to manage the duties of taking on/off Bunny’s halter and bridle; she was able to put on her little 15” Pessoa Rodrigo Pony Saddle all by herself–and took great pride in her ability to do nearly everything on her own! But, Johanna was not the only one to have found comfort in Bunny’s size… We, too, felt a sense of ease as we watched Johanna peruse around the farm with her little pony, or lead little Bunny to and fro her paddock. Having a small and manageable pony really supported Johanna’s independence, and also her horsemanship. Being able to tack, groom and lead her pony gave Johanna the hands-on experience she needed to mature as a rider. While many will say a small pony like Bunny may not be practical in terms of longevity, we have found the benefits were without a doubt immense; and for Johanna, those benefits were very much responsible for her growth as a young equestrian.

With a little beginner on our hands, it was important for our pony to have a good temperament.

While this may seem like an obvious “box” to check off on the “Pony Shopping Checklist”, we certainly wanted a polite pony, not spooky, and with excellent ground manners. The last thing we wanted was for fears caused from negative ground interactions to carry over to fears in the saddle. Bunny was a saint for little Johanna. She joyfully picked up her feet for her–always attentive enough to predict the next hoof in line to be “picked” cleaned; and she was not a biter or a kicker. She was a great pony with a great temperament, and that made it all the easier for Johanna to bond with her and feel safe with her. 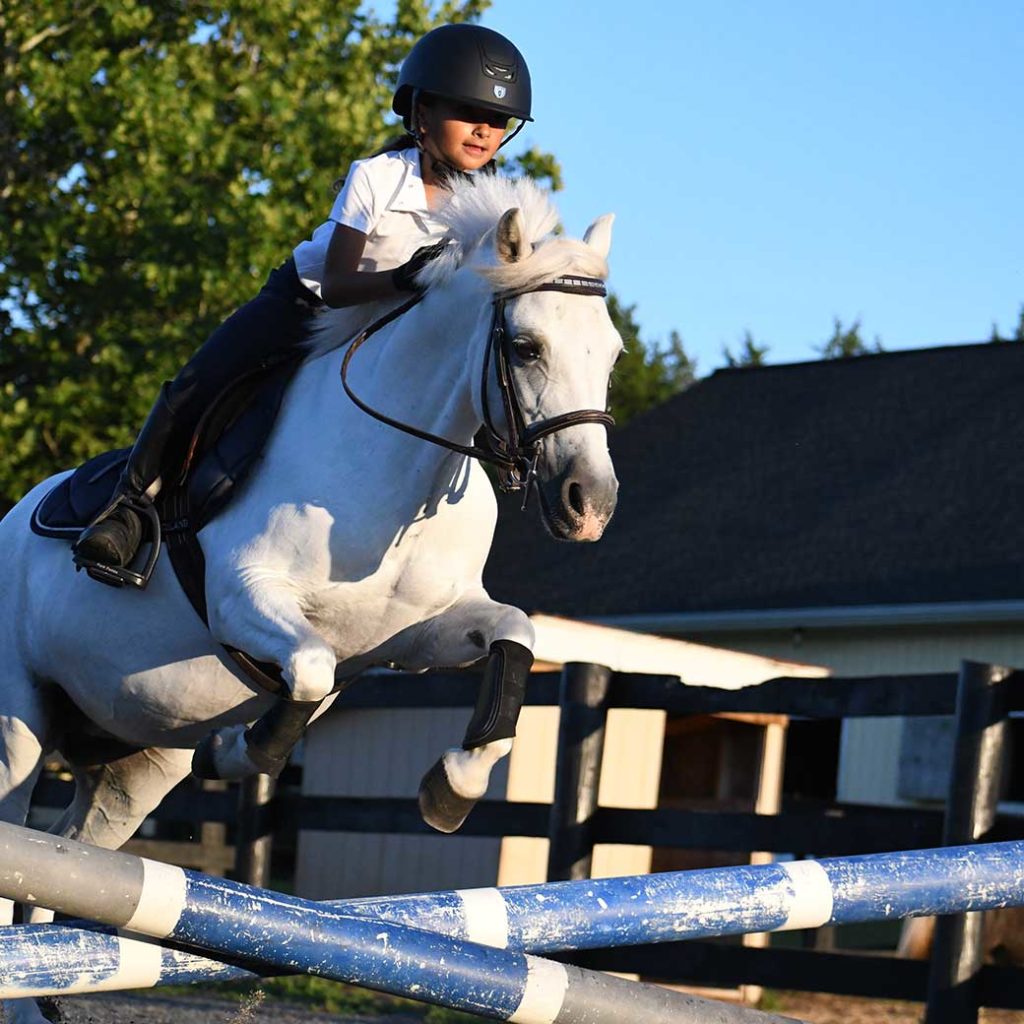 A pony for right now.

We were fortunate enough to have had a trainer (who was also a dear friend of our family) who helped us in our search for the “perfect” first pony. While Johanna was not very far along in her riding journey and was still very much a “beginner”, we needed a pony that would be appropriate for her skill level. Bunny was advertised as a “beginner” pony. She had some local show experience (which was also great) and we liked that she presented something new to Johanna in the form of having a little faster pace than the older lesson ponies/horses she was used to.

Bunny was excellent in advancing Johanna at the canter and over fences. It was the latter that they truly bonded over and we can confidently say that Bunny was appropriately named–bunnies like to hop, and this Bunny absolutely loved to jump! It was Bunny who was responsible for giving Johanna confidence in jumping and that has become her most favorite thing to do while in the saddle, even to this very day.

As first-time horse owners, we preferred a pony that did not have any pre-existing health conditions.

We think the most nerve-racking part of the process of purchasing a pony–without a doubt–has got to be awaiting the results of the pre-purchase vet exam. We wanted to be wise and not bite off more than we could chew by not committing to a pony with health conditions that required a level of experience and knowledge to properly care for. Putting our nerves to ease and erasing our negative thoughts about our unicorn dreams remaining nothing more than a figment of our imagination, the vet who examined Bunny said she had “never seen a cleaner bill of health!” It was a relief and another box checked off our list.

While the world of horse shopping can be difficult to navigate, having the proper team in place to help makes a world of difference. We are thankful for the guidance we had and for all the new experiences we as a family have gained from being first-time pony-parents. Not only did Johanna’s riding improve, but it offered our family a new activity to participate in together, and for that we are grateful.

Johanna’s journey with Bunny was not a long one, but most definitely a necessary one. We as a family believe that every horse has something to teach us, whether it is on our journey for only a single lesson or for many years.  In conclusion, to match the pony or horse with the rider is the most important.

Already have a pony or recently purchased one? Shop Horseware Ireland’s pony collection for new gear.