» Blog » Events » Famous Horses in Hollywood: Where are they now?

Horses have been a source of magic, mystery, and mythos for as long as anyone can remember. From Odin’s 8-legged horse Sleipnir to the modern Seabiscuit, famous horses have inspired us with their grace, power, and freedom.

To make films, horses are brought in and add a flair of power, majesty, and accuracy. Without horses, humans would still be traveling on foot from place to place. Horses have been in films since the early 1900s. Many horses have graced the silver screen such as Trigger, Mr. Ed, Black Beauty, Flicka, the unicorns from the 1985 film Legend, and so many more.

Horses have been used since the creation of film to work side by side as equal parts actor and partner. We all watch actors move through their careers, and eventually retire; but, where do these famous horses go after they are finished with their part in movies?

Who are some actors who are also horse people?

Viggo Mortensen (Lord of the Rings, Hidalgo) has fallen in love with several of his horse coworkers and ended up bringing a few home with him. At the premiere of the movie, Hidalgo Mortensen showed up riding the same horse that he rode while filming.

William Shatner (Star Trek) is well known in the reining world. He is a long-time accomplished equestrian, winning awards in western pleasure, reining, and fine harness. He owns ranches in both Kentucky and Los Angeles.

Kaley Cuoco (The Big Bang Theory) is an accomplished show jumper and a big voice for the fair treatment of horses in the show world.

Country music star and actress Shania Twain (I Still Believe) has been a long-time horse lover. She incorporates her love of horses into her music and her life. Shania has been known to sit on her horse while performing her music on stage.

Last, but not least, A-list actor Morgan Freeman (Bruce Almighty, Invictus) owns a horse ranch in Mississippi and has been riding since he was a kid. His first movie that included horseback riding was the 1990 film Robin Hood, Prince of Thieves which solidified his need to have a space for his own horse friends.

Not all of them take home their 4-legged film counterparts. If the horses are used on set, where do they go after they are done filming?

What happens to famous horses used in movies?

There are several options for horses to go to after they are finished filming. Most horses go back to the farm that they originate from. However, they have also been known to be offered for sale. All of this is supervised under the watchful eye of the American Humane Association.

Another actor that has been known to take horses home from the movie they’re filming is Johnny Depp. In the 1999 film Sleepy Hollow, the one-eyed horse that Depp rides was set to be put down after the film was over. Depp purchased this horse and let it retire on his family ranch in Kentucky.

How do filmmakers hire famous horses for movies?

When filmmakers are in search of horses for their movies they lease or purchase horses from local ranches. They also hire stunt riders and their horses. Some horses are sought after specifically for the way they look such as the horses used for Flicka, Black Beauty, or Seabiscuit.

What is the most popular breed of horse used in films?

There is no singular breed of horse that is used in Hollywood. It all depends on the look of the horse and the part, just like with their human counterparts. If the director is requiring a more dramatic and royal-looking horse, they’ll typically hire a Friesian or an Andalusian. However, directors don’t usually discriminate between breeds if they need a large number of horses for an intense charging scene. For example, most of the horses that were hired in the movie War Horse were Andalusians, warmbloods, and thoroughbreds.

When more than one horse is used for a single part in a movie the makeup department will be charged with making the extra horses look like the main horse that will be used in the movie. This can be achieved through animal-safe dyes and paints.

Who are some famous horses and where are they now?

Trigger had a long career of 5 years and appeared in over 180 films and TV episodes. After the talented palomino passed away he was stuffed and set up in The Roy Rodgers-Dale Evans Museum.

5 horses were used to play Hidalgo. The main stunt horse went home with screenwriter John Fusco. The horse that was used for his coloration and markings went home with lead actor Viggo Mortensen.

The main horse that played Seabiscuit in the 2003 film Seabiscuit was an actual racehorse and won several races over his career. While Seabiscuit has been gone for several years, you can still visit Ridgewood Ranch where he was bred. The Seabiscuit line continues as a new filly was born in May of 2021. 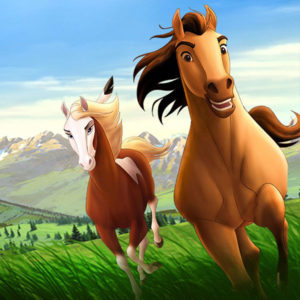 The 2002 movie Spirit: Stallion of the Cimarron was a masterpiece that inspired a whole generation of young horse lovers. It was based on a real Keiger Mustang stallion named Spirit, who is still alive to this day. At the brisk age of 25, Spirit lives at Return to Freedom’s horse sanctuary that the movie production company Dreamworks put together after the movie had been released. Is also known to make regular appearances, and is an ambassador for the non-profit organization.

The death of the horse Artax in the Swamp of Sadness from the 1984 film The Neverending Story made an entire generation of children feel like they had sunk in the swamp along with the little horse. Let us put your mind at ease, contrary to popular rumors, no horses died while making the film. The 2 horses that played Artax were very well trained and looked after. One of the two mares that portrayed Artax was gifted to the actor that played Atreyu (Noah Hathaway). She lived out her days happily on a beautiful ranch in Germany.

Horses will always be viewed as magical and mystical creatures in Hollywood. Whether it’s the beautiful red mare, Roach, from The Witcher, or the plucky little pony, Merrylegs, from the 1994 film Black Beauty. Horses will always hold a place in the hearts of the actors who ride them and the fans who watch them.